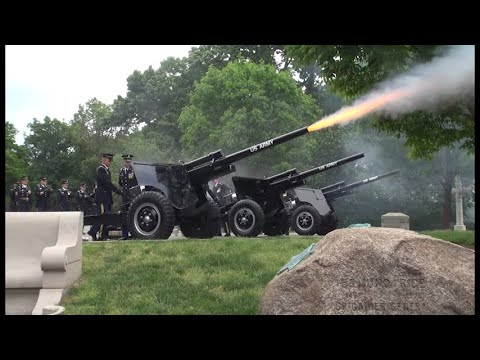 “This country is a magnificent place-blessed by God-and is worth dying for…” words spoken by:

Major General Michael D. Healy, US Army-Ret, a celebrated Airborne Infantry-Ranger who gave over 35 honorable years of service to country. He became an elite Green Beret one year after its formation in 1952, and was “one of the first” to reach the rank of general. The DVD by Arlington Media is 1080p perfect. YT limited my upload quality a bit. (Click to fav part)

Major General Michael D. Healy (US Army-Ret) earned his nickname, “Iron Mike” in 1951 during the Korean War after parachuting behind enemy lines at Munsan Ni with the 4th Ranger Company. After landing on a thatched hut and rolling in to a ditch, a grenade blasted his carbine from his hand and he took a NK bayonet to the groin. Healy eventually took command from a “frozen” captain and “…while seriously wounded (and with four volunteers)valiantly attacked the trenches, at times with only a Ka-Bar knife, enduring withering enemy machine gun fire, before taking and holding the high ground.”

According to the Special Warfare Center and School, “General Healy was known by his men for his loyalty, compassion, and love, as much for his tenacity in war.” In 2015, he was inducted as a Distinguished Member of the Special Forces Regiment saying,” This is the highest honor that I have ever received, but it’s not really mine”-“This honor belongs to every soldier I was ever honored and permitted to serve with.”

Mike Healy was 19 and preparing for priesthood when he enlisted during the final months of WWII. His friends were joining for the expected Japanese invasion, and he “felt guilty.”

During his life Healy served nearly eight years in combat including five and a half ‘official’ tours in Vietnam. He was actually one of the first American soldiers in Vietnam. In 1963 as a SF Major he commanded battalion-sized units of indigenous SF fighters that bore his name (The Mike Force.) In 1973, BG Healy was one of the last American soldiers to leave during the “Vietnamization” of the war.

In 1966, after two years in command of the 1st Battalion/501st Arbrn, he was selected to attend the Army War College, but instead chose to deploy with his battalion to Vietnam for his third tour rather than have someone command who, “…did not know my men.”

In the late sixties after the CIA/SF scandal, Army brass believed SF was “too detached” from regular forces. General Creighton Abrams (CO RVN) called upon then Col Healy to command the 5th SFG in Vietnam. Abrams wanted Healy to break-up the SF NCO leadership, however during his 20 month command he resisted and Green Berets once again held their heads high.

After bringing the 5th SFG home to Ft Bragg, Healy became CO of the then-JFK Center & School where he, “…was pressured by conventional Army leadership to dismantle Special Operations instead Healy actually saved SOF by using his experience to put an emphasis on counterterrorism.” His expertise in the oil rich middle east was frequently called upon. His last assignment was Ft Sheridan, Ill. where 35 years earlier he walked in the gates after enlisting. He walked out of those same gates on the day he retired.

*See the “Legends of the SOF video.”